When it comes to the concept of “daylight saving,” modern people simply accept the twice-annual change in time as a fact of life. However, like many aspects of modern life, daylight saving may have serious negative effects. For many people, the effect is similar to jet lag, a movement across different time zones. They suffer fatigue, difficulty sleeping and other mild effects that slowly pass. Other people may have more serious—even life-threatening—effects. Could springing forward and falling back actually be a risky decision for our country?

The History of Daylight Saving

Daylight Saving Time (DST) was not a reality for most of human history. The famously frugal Benjamin Franklin was the first to propose turning clocks to allow more light in the actual day, but this idea did not come to fruition for more than a century. Germany adopted the practice of changing clocks twice a year as an energy-saving measure in World War II. Many countries followed suit due to the obvious practicality.

Does this practice actually save money? In most areas it does; around 1 percent. However, in warm areas such as Florida, it appears to actually lead to more energy usage, as it reduces lighting needs while increasing the need for more expensive air conditioning. Daylight Saving Time likely leads to a very small overall cut in energy needs. Is that enough to justify the practice?

Could Changing the Time be Harmful?

Any savings in energy would be worth the change if it came at no cost whatsoever. However, a growing body of work suggests that this practice may have serious economic and physical costs. Light is one of the major cues for regulation of our circadian rhythms, so it makes sense that changing our sleep-wake cycle in relation to daylight hours could have consequences.

Several studies have indicated that daylight savings time may be a very expensive habit. Accidents, both in vehicles and on the job, increase sharply the next day. In addition, there is an immediate increase in strokes, heart attacks and a variety of other serious health problems: Even with the change back to standard time, the biorhythm gets confused. Is this huge cost worth the difference in energy expenses? Many countries such as Finland are discussing giving up daylight saving due to its destructive effects on citizens.

How Our Bodies Process a Time Change

As mentioned before, our internal clocks process a time change as a type of jet lag. Suddenly, external cues no longer line up with our own internal schedules. There are several factors that can make this phenomenon better or worse. For example, most people suffer more with the springtime change than the one that occurs in the fall. This is because the spring change generally involves missing an hour of sleep every night until our internal clocks have adjusted to the change. Fall, on the other hand, is easier to adjust to because people are gaining sleep, which most modern people need desperately. 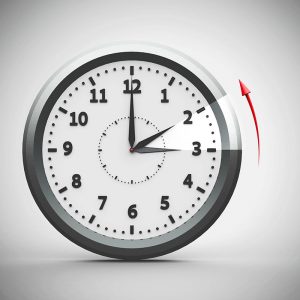 In addition, a person’s chronotype (whether they are a so-called early bird or night owl) also can have an effect on how they react to the time change. In general, night owls or late chronotypes do not adjust as easily or quickly. This is likely due to the fact that they are already getting up as late as they comfortably can, so a time change means a substantial loss of sleep. Early birds, on the other hand, can simply be a little less early for a few days until their internal clocks adjust.

Surviving and Thriving Through Time Changes

There are several ways that people can keep the upcoming time change from having negative effects on their health and their lives. Consider the following options:

In addition, it is important to make a sleep schedule and stick to it. Refuse to sacrifice sleep for work, study or social activities. In addition, avoid taking a nap during the day, even if you are very sleepy. Getting up and going to bed at the same time every day is crucial to developing a stable sleep-wake cycle.

Daylight Saving may not be the healthiest concept for most people. However, it remains a fact of life. If you are struggling to turn your internal clocks forward or backward every fall and spring, there may be ways of helping your body to adjust. Talk to your doctor if you are having trouble even with simple lifestyle choices.

Medichron Publications LLC is a publishing company for the online health and medical community. The company specializes in research in the field of chronobiology and news pertaining to a chronobiological approach to health.